Metal roofs have a lot of advantages over other roofing materials. Metal is incredibly durable and weather-resistant. It won’t rot, crack, burn, crumble, split, or break. Still, we often get calls from customers wondering why their metal roof could possibly leak. 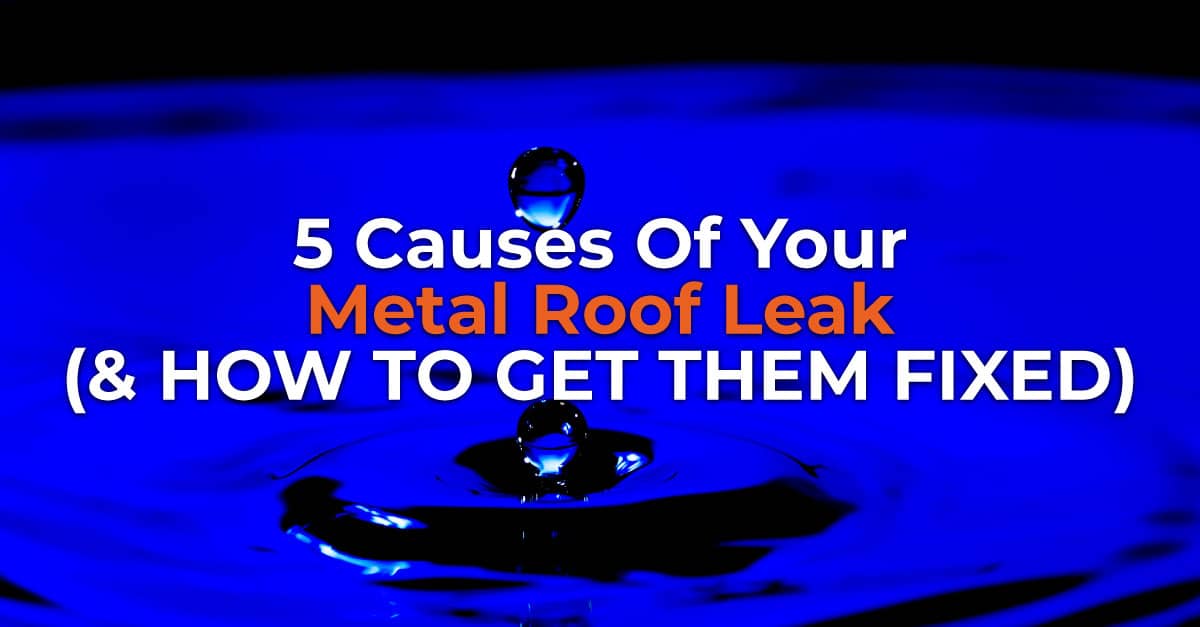 When installed properly, a metal roof should last decades (40 to 70 years is a typical lifespan). Still,there are a few issues which can cause a metal roof to leak, many of them having to do with mistakes made during installation.

Here’s what can go wrong, and what our team can do to put it right.

The roofing screws used to install metal roofs include a rubber washer at the base of the screw head. The washer forms a gasket of sorts between the roofing panel and the screw. It’s a simple design which, when done right, does a great job keeping water from penetrating your metal roof.

Unfortunately, there are a number of things which can go wrong with roofing screws. This is why it’s so essential to have your metal roof installed by only the most qualified roofing experts. Common roofing screw issues include:

The only way to identify leaky roofing screws is a detailed visual inspection by a roofing expert. Even if your metal roofing screws were driven in just right, it’s still a good idea to have them looked at every few years, because they can “back” out over time due to wind, vibrations, and roof shifting.

Stack flashings are the so-called "boots” or flashings in spots where pipes or vents come out of a metal roof. Found around plumbing and air vents, they are typically made of rubberized material to form a seal around the pipe or vent.

These are some of the areas where a metal roof is most prone to leakage, partly because stack flashings have a lifespan of less than half that of the roof itself. Metal roofs are prone to expanding and contracting due to heat, and this puts a lot of strain on stack flashings over time. Once they fail, the best option is to have stack flashings replaced by a qualified roofing expert.

Typically, sealants are installed at the same time as your metal roof. The problem is sealants don’t last as long as the metal itself and will need to be replaced from time to time. Checking the sealant should be a part of the regular maintenance routine for metal roofs, particularly around these areas:

It’s usually a good idea to have a roofing professional inspect the sealant in these areas and replace it as needed. Only a sealant designed specifically for metal roofs should be used. Typical silicone caulking doesn’t always adhere to roof surfaces and may not maintain its seal through all the expanding and contracting which can occur with metal roofs.

It’s fairly common for HVAC units to be installed on a metal roof. In most cases, the HVAC will sit on top of a roof curb, which is a metal structure designed to both support the weight of the unit, and offer a means for connecting the ductwork.

The area around a roof curb is one of the most common places for leaks to occur on metal roofs. Flashing should be installed all around the curb, but even if this is done correctly, water can get through over time, especially on the uphill side of the curb. Our roofing experts will check all curb flashing, and replace it if needed.

There will inevitably be seams and places where panels overlap on a metal roof. It’s absolutely crucial for these places to be properly sealed when your roof is first installed. Water can actually be drawn uphill, against gravity, through the forces of adhesion, cohesion, and surface tension.

This process is known as capillary action. It can cause a metal roof to leak at its seams even if the overlapping seam is above the underlying panel. To prevent this, we use sealant or butyl tape to seal joints and overlaps. Because roof panels can shift and move over time, we also recommend inspecting these areas regularly to make sure they’re still secure.

The first step to fixing leaks in a metal roof is identifying the underlying cause. West Orange Roofing is a team of dedicated roofing experts who've had decades of experience fixing metal roofs in Central Florida, and we’re here to help any way we can.

To learn more about how to find a metal roof leak, and how to fix it